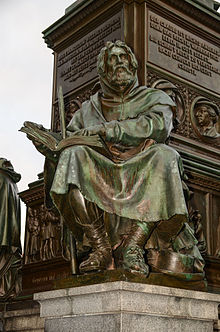 More than three hundred years before Martin Luther was born, an unlikely reformer suddenly appeared in the city of Lyon in southeast France. His protests against doctrines and practices of the Roman Catholic Church were strong tremors foretelling the coming spiritual earthquake called the Reformation. And the movement he launched survived to join the great Reformation. He is known to history as Peter Waldo.

Many details about Waldo are not known, including his name. We don’t know if Peter was his real first name, since it doesn’t appear in any document until 150 years after his death. His last name was most likely something like Valdès or Vaudès — Valdo (Waldo) was the Italian adaptation. We also don’t know the year Peter was born or the precise year he died — historians disagree over whether he died between 1205 and 1207 or between 1215 and 1218.

But we do know a few earthshaking things.

In 1170, Waldo was a very wealthy, well-known merchant in the city of Lyon. He had a wife, two daughters, and lots of property. But something happened — some say he witnessed the sudden death of a friend, others say he heard a spiritual song of a traveling minstrel — and Waldo became deeply troubled over the spiritual state of his soul and desperate to know how he could be saved.

The first thing he resolved was to read the Bible. But since it only existed in the Latin Vulgate, and his Latin was poor, he hired two scholars to translate it into the vernacular so he could study it.

Next, he sought spiritual counsel from a priest, who pointed him to the rich young ruler in the Gospels and quoted Jesus: “One thing you still lack. Sell all that you have and distribute to the poor, and you will have treasure in heaven; and come, follow me” (Luke 18:22). Jesus’s words pierced Waldo’s heart. Like the rich young ruler, Waldo suddenly realized he had been serving Mammon, not God. But unlike the rich young ruler who walked away from Jesus, Waldo repented and did exactly what Jesus said: he gave away all he had to the poor (after making adequate provision for his wife and daughters). From that point on, he determined to live in complete dependence on God for his provision.

A Movement Is Born

Waldo immediately began to preach from his Bible in the streets of Lyon, especially to the poor. Many were converted, and by 1175 a sizable group of men and women had become Waldo’s disciples. They too gave away their possessions and were preaching (women as well as men). The people started calling them the “Poor of Lyons.” Later, as the group grew into a movement and spread throughout France and other parts of Europe, they became known as “The Waldensians.”

The more Waldo studied Scripture, the more troubled he became over certain doctrines, practices, and governing structures of the Catholic Church — not to mention its wealth. And he boldly spoke out against these things. But since the Church officially prohibited lay preaching, Waldo and his ragtag band drew opposition from church leaders.

The Archbishop of Lyons was particularly irked by this uneducated, self-appointed reform movement and moved to squash it. But in 1179, Waldo appealed directly to Pope Alexander III and received his approval. However, only five years later the new pope, Lucius III, sided with the archbishop and excommunicated Waldo and his followers.

In the earlier years, the Waldensian movement was a reform movement. Waldo never intended to leave the church, and he held to numerous traditional Catholic doctrines. But after the excommunication, and continuing beyond Waldo’s death, the Waldensian’s Protestant-like convictions increased and solidified.

Despite the excommunication and Waldo’s death, the Waldensian movement continued to grow for quite a while. It spread into northern Italy and regions of Spain, Austria, Germany, Hungary, and Poland.

But the Roman Catholic persecution also continued and grew in severity, till by the fifteenth century, the Waldensian ranks had shrunk into small, obscure communities in the alpine valleys of France and Italy. But when the Protestant Reformation burst on the scene in the sixteenth century, most Waldensians became Protestants.

Peter Waldo was proto-Protestant, though he didn’t know it. He was a merchant turned prophet who simply believed in the word of God with all his heart, which he demonstrated with all his life. And in taking God at his word, Waldo turned his world upside down.

For more on Peter Waldo:

The Waldensian Dissent: Persecution and Survival by Gabriel Audisio

Waldo and the Waldensians Before the Reformation by Emilio Comba

Peter Waldo and the Waldensian Movement by Paul Thanasingh