Sermon: The Fire of Evangelism 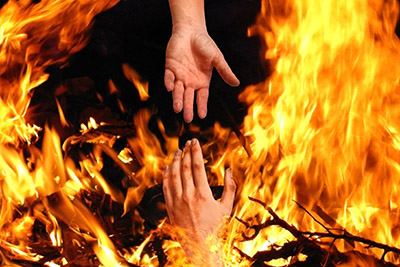 Sermon Outline:
INTRODUCTION:
God has two ways of destroying His enemies. One is the old school method—the fire coming down out of the sky method. This is the method that leaves a smoking crater. But the other is a far more glorious method, and that is His method of destroying enemies by turning them into friends. That is a far more wonderful destruction indeed. In order to accomplish the former, all He had to do was exercise His power. But to accomplish the latter, His Son had to die.

THE TEXT:
“The vision of Obadiah. Thus saith the Lord God concerning Edom; We have heard a rumour from the Lord, And an ambassador is sent among the heathen, Arise ye, and let us rise up against her in battle. Behold, I have made thee small among the heathen: Thou art greatly despised. The pride of thine heart hath deceived thee . . .” (Obadiah 1-21).

BACKGROUND OF THE TEXT:
The most likely setting for this book is after the destruction of Jerusalem by the Babylonians in 586 B.C. and before Babylon’s campaign against Edom in 553 B.C. Edom was a mountainous region, due south of the Dead Sea. Just to get you oriented, this was the era when Siddhartha Gautama (the Buddha) was born in Nepal, King Croesus ruled in Lydia, and when the temple of Artemis was built in Ephesus. The Edomites were descended from Esau, and godliness was not unknown among them (e.g. Job). But in this instance, they had rejoiced in an ungodly way during Judah’s Babylonian crisis, and Obadiah pronounces a judgment upon them as a consequence. At the same time, this prophecy extends far beyond the immediate fulfillment.

SUMMARY OF THE TEXT:
The small book begins with a “vision” concerning Edom (v. 1). Armies are already gathering against her. As they had held Judah in contempt, so they were going to be held in contempt (v. 2). They were a small nation, misled by their pride and apparently invulnerable mountain fortresses (vv. 3-4). Who will bring Edom down? God will. Ordinary thieves would usually leave something behind—but not here, not now. Esau will be stripped bare (vv. 5-6). Just as Edom betrayed Judah, so also will Edom’s allies betray them (v. 7). Just as they “cut off” Judah’s refugees (v. 14), so also will they be cut off (vv. 8-9). Mount Esau is a way of referring to Edom, and Teman was a chief city of theirs, named after Esau’s grandson (Gen. 36:9-11). They failed to help their brother Jacob in the day of violence (hamas), and will be judged for this sin of omission (vv. 10-11). Failing to intervene led them into even worse sin—gloating, rejoicing, boasting, looting, and even capturing and turning over refugees (vv. 12-14). The day of the Lord, the day of recompense, was upon them (v. 15). To drink sin is to drink wrath, and destruction is the result (v. 16). But deliverance will come to Zion, and everything will be restored (v. 17). The house of Jacob will be on fire, and the house of Esau will be fields of stubble (v. 18), with predictable results. People from all over will possess Edom (vv. 19-20). Deliverance will come, and Zion will judge Edom, and the kingdom will be the Lord’s (v. 21).

LEARNING TO READ:
The Bible teaches us—comparing passage to passage—that you all are part of the fulfillment of Obadiah’s prophecy. In Obadiah 18-20, the prophet quotes Amos 9:11-12. And the prophet Joel quotes Obadiah 17 in Joel 2:28-32. The phrases in question are these: “that they may possess the remnant of Edom” and “in Jerusalem shall be deliverance, as the Lord has said.”
This is significant because that very section of Amos is quoted by James, the Lord’s brother, at the Council of Jerusalem, referring to the inclusion of the Gentiles through the gospel (Acts 15:12-21). And the relevant passage in Joel is quoted by Peter on the day of Pentecost (Acts 2:16), with the claim that it was all fulfilled on that day. So though neither James nor Peter mention Obadiah by name, they do tell us what he is talking about by direct implication.
In what day will Mt. Zion rule over Edom? What day will that be? It will be the day the Tabernacle of David is reestablished. And what will be the day of escape for those in Jerusalem? It will be the day of Pentecost. Where are you from? “I am from northern Idaho.” And what are you doing here at Christ Church today? “I am possessing Mt. Esau” (vv. 19-20).

THE SIN OF SCHADENFREUDE:
This is the sin of delighting in the misfortune of others with a vindictive spirit. Take care. Remember the deadly progress of malice in vv. 12-14. It is a small step from rejoicing when someone falls to kicking them as long as they are down. God hates it, and the sin of Edom in this regard was quite striking. It is rebuked in Ps. 137:7 and again in Lamentations 4:21. Remember this perverse tendency of the human heart—once you have wronged someone significantly like this, you might never be able to forgive them.
Be angry and sin not. Do not rejoice over your enemy’s failure, even if he is your lawful enemy (Prov. 24:17-18). Indignation, even at its best, is like manna—it will rot overnight. Remember that Judah deserved her destruction (as Jeremiah was telling them), but Edom added an ungodly amen. Do not be like those who do not know what spirit they are of (Luke 9:55). But the way to avoid this sin is not to search out some sort of room temperature tepidity.

MEN OF FIRE:
John Chrysostom once said something striking about the apostle Peter. “Peter was a man made all of fire, walking among stubble.” This is the image that we have at the end of Obadiah. The house of Jacob (that’s you) will be a fire and a flame (v. 18), and the house of Esau (the unbelieving world) will be fields of dry stubble. God’s people are called to be a fiery people—fire came down upon our heads at Pentecost (Acts 2), and fire comes out of the mouths of the two witnesses (Rev. 11:5). Our spirits are supposed to be on the boil (Rom. 12:11). We are a fiery people in a combustible world. This is not surprising, for our God is a consuming fire, and we are in Him (Heb. 12:29).