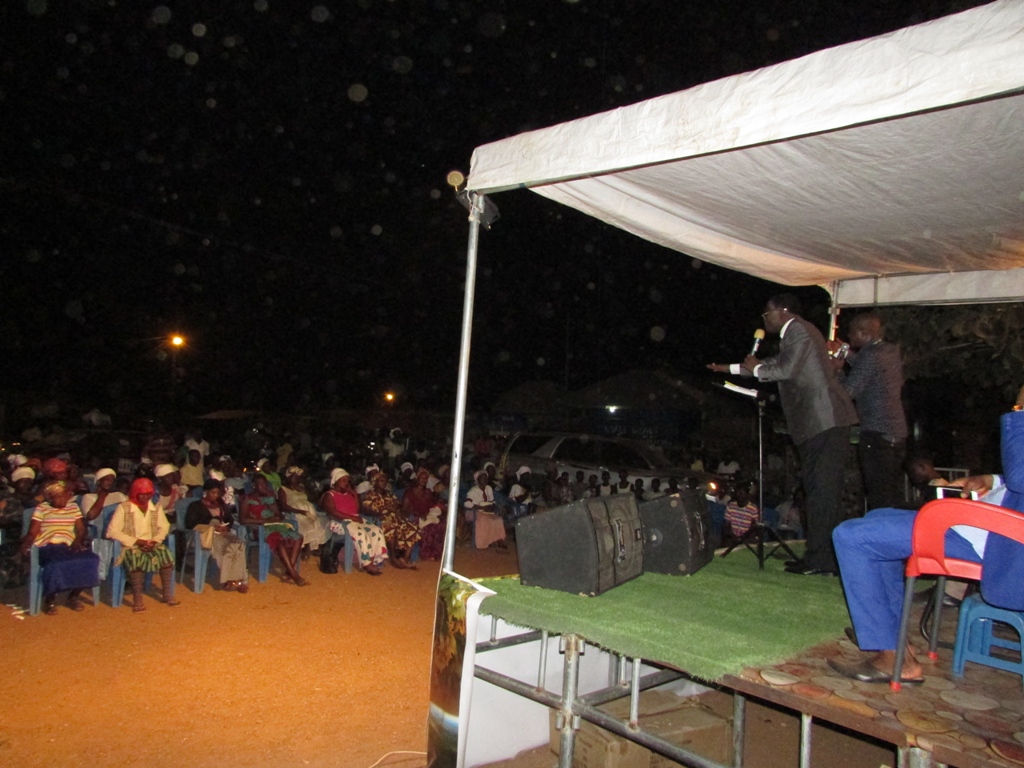 We embarked on a one week evangelistic outreach together with Team Outreach Worldwide from the 18th – 24th November, 2019  at Donkorkrom and Maame Krobo township in the Kwahu North, precisely the Afram Plains, located in the Eastern Region of Ghana.  We arrived at the main mission grounds at Donkorkrom in the afternoon on the 18th November, 2019 same day. Our first place of contact was at the House of Authority International church premises in community.  We were officially welcome by the leadership of the local church led by the host pastor, Prophet Caleb. From there we proceeded with pre-missions meeting at the church premises same day of arrival. The details of the meeting constituted getting to know our local mission partners and also the leadership of the host church.  We were warmly received and were made to feel at home.  We were briefed about the history of the town, Donkorkrom.   We met the Chief of the town to officially announce our presence and purpose of our mission.  We had a pre-missions meeting to remind ourselves about goals and objectives of the missions and then split into zone A and B to undertake the missions’ assignment in two different locations; that’s MaameKrobo and Donkorkrom respectively.

The following day 19th November, 2019 at the St. Francis Catholic church, our lodging place, we all gather together for morning devotion, it was led by Pastor Hayford followed by an exhortation from Pastor Benjamin. After which the team sorted out crusade materials and instruments according to their zones.  Zone A, departed to Maamekrobo mission field at about 2:00pm same day.  Zone B had pre-crusade prayers time prior to the crusade, afterward move to the crusade grounds to prepare the ground for the launch of the gospel crusade in Donkorkrom Township. The program began with intercessory prayers by Pastor Benjamin, followed by song ministrations by Minister Paa Kofi.  Rev. Ed Arcton, was the main speaker on the first day to open the crusade. He spoke on the topic “The love of God”. At the end of the crusade souls responded and they gave their lives to Christ as our Lord and personal savoir that night. The crusade recorded massive attendance on the first night.  In the night hours the “keepers of the flame were on their knees in for a period of time in prayer”.

On the 20th November, 2019, the following day we proceeded to our morning devotion. It was led by Pastor Fred followed by an exhortation from Apostle Emmanuel White. After breakfast, the team set off for personal evangelism within community of Donkorkrom and a nearby community called Atakora.  We reached out to schools in the community both primary, junior high and senior schools as well as street evangelism and marketplace evangelism to share the gospel of our Lord Jesus Christ. Some of the schools reached are the Nana Boadu JHS, Methodist Primary and JHS, Donkorkrom Agric Senior High School, the Presbyterian Primary and JHS and other schools have opportunity to hear the gospel preached unto them. At our return from evangelism same day we had a meeting with the Chairman of Team Outreach Worldwide, Evangelist Martin who arrived the previous day at Maame Krobo and was with zone A team before proceeded to Zone B at Donkorkrom. The meeting was to brief the chairman on the crusade progress at zone B.  The chairman encouraged every team member to makes it purpose to win a soul into the kingdom of God at this year Mission 2019. Soon the meeting was over and we were ready to move to the crusade grounds for the second day crusade. The Crusade began with prayers led by Pastor Benjamin and song ministrations by Minister Paa Kofi.  Apostle Emmanuel White was the main speaker that night, he spoke on the topic “It’s not just your time, it’s your turn”. At the end of the crusade, more souls gave their life to Jesus Christ. The Crusade was well attended. In the night the keepers of the flame engage in prayer time for some time.

Missions’ day 3 began with our customary morning devotion led by Pastor Fiifi Kakraba. Pastor Charles gave the exhortation to encourage everyone. After some preparations the team set out again on personal evangelism in the community, schools and marketplaces.  The evening crusade started with prayers led by Pastor Benjamin and Pastor George followed by song ministration by Minister Paa Kofi. The main preacher was Prophet Samuel Nii Okoh, he spoke on “The Kingdom of God” and after which the crusade recorded more souls who gave their live to Jesus Christ. The crusade keeps recording more attendance of people day by day. The “keepers of the flame prayer hour” continues.

The following day, Friday morning we gather together for our morning devotion, this was led by Pastor Hayford, word of exhortation came from Prophet Samuel Nii Okoh.  The team prepared for another day of evangelism and follow-ups of previous souls who gave their lives to Jesus in the community. Every member was encouraged to commit to personal evangelism and to submit field reports to the field supervisors. Our Medical team arrives and began medical screening to the whole community at House of Authority International Church premises.   Many indigenous local people from the community responded to the center for free medical screening and free drugs administered to them. The evening crusade began with prayers by Pastor Fiifi Kakraba and song ministrations by Minister Paa Kofi. The speaker was Apostle Samuel Koduah who spoke on “After death, what next?” The crusade witness overwhelming attendance of people out of which some people gave their lives to Jesus Christ as Lord and personal savoir.

Saturday was our Mission day five.  We began with our morning devotion led by Kennedy Asare followed by an exhortation from Rev Ed Arcton.  Same morning was a prophetic Church service at House of Authority International premises. Apostle Emmanuel White ministered with great spiritual impartation under the unction of the Holy Spirit. Many souls were blessed and the presence of the Lord was mightily felt. The service ended at noontime and we return to our hostels to prepare for the evening gospel crusade. That evening was the last crusade in Donkorkrom to climax the end of the missions 2019. The crusade began with prayer led by Pastor Fiifi Kakraba, the preacher was Pastor George Aguh. The crusade recorded that night favourable attendance. Prayers were offered for all attendance, the community, local churched and Pastors for God divine visitation and revival in the whole town that night.

The local Pastor, Prophet Caleb was honored with a certificate of Recognition and Appreciation.

He did extraordinary well in hosting the whole Gospel Crusade 2019 program.  Our mission team after Church service set off to meet zone A at Maamekrobe same day afternoon.

At our arrival the departure ceremony was held and oversees by the Chairman of Team Outreach Worldwide Evangelist Martin. Faithful and hard workers team members were honored with certificates. Mission 2019 now accomplished. We all finally set off to the City of Accra and other part of the country same day.

The mission 2019 was a successful one. We saw the move of the Holy Spirit leading to the salvation of souls saved. Positive response from the community and other people who were at the gospel crusade are encouraging. Our evangelistic gospel campaign was and is a blessing to the people of Donkorkrom and Maamekrobo. We bless the Lord for his faithful, travelling mercy and protection in our going out and coming in.