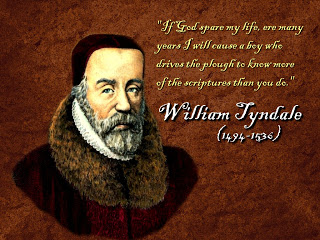 In the early 1530s, an English merchant named Stephen Vaughan was commissioned to find William Tyndale and inform him that King Henry VIII desired him to return from hiding on the Continent. In a letter dated June 19, 1531, Vaughan wrote about Tyndale (1494–1536) these simple words: “I find him always singing one note.”

That one note was this: Will the King of England give his official endorsement to a vernacular Bible for all his English subjects? If not, Tyndale would not come. If so, Tyndale would give himself up to the king and never write another book.

The king refused. And Tyndale never went to his homeland again. Instead, if the king and the Roman Catholic Church would not provide a printed Bible in English for the common man to read, Tyndale would, even if it cost him his life. Which it did.

Plowboys Will Know Their Bible

When Tyndale was 28 years old in 1522, he was serving as a tutor in the home of John Walsh in Gloucestershire, England, spending most of his time studying Erasmus’s Greek New Testament, which had been printed just six years before in 1516.

Increasingly, as Tyndale saw Reformation truths more clearly in the Greek New Testament, he made himself suspect in the Catholic house of John Walsh. John Foxe tells us that one day an exasperated Catholic scholar at dinner with Tyndale said, “We were better be without God’s law than the pope’s.”

In response, Tyndale spoke his famous words, “I defy the Pope and all his laws. . . . If God spare my life ere many years, I will cause a boy that driveth the plow, shall know more of the Scripture than thou dost.”

Four years later, Tyndale finished the English translation of the Greek New Testament in Worms, Germany, and began to smuggle it into England in bales of cloth. By October 1526, Bishop Tunstall had banned the book in London, but the print run had been at least three thousand. And the books were getting to the people. Over the next eight years, five pirated editions were printed as well.

In 1534, Tyndale published a revised New Testament, having learned Hebrew in the meantime, probably in Germany, which helped him better understand the connections between the Old and New Testaments. Biographer David Daniell calls this 1534 New Testament “the glory of his life’s work” (William Tyndale, 316). If Tyndale was “always singing one note,” this was the crescendo of the song of his life — the finished and refined New Testament in English.

For the first time ever in history, the Greek New Testament was translated into English. Before his martyrdom in 1536, Tyndale would go on to translate into clear, common English not only the New Testament but also the Pentateuch, Joshua to 2 Chronicles, and Jonah. All this material became the basis of the Great Bible issued by Miles Coverdale in England in 1539 and the basis for the Geneva Bible published in 1557 — “the Bible of the nation,” which sold over a million copies between 1560 and 1640.

What drove Tyndale to sing one note all his life? It was the rock-solid conviction that all humans were in bondage to sin, blind, dead, damned, and helpless, and that God had acted in Christ to provide salvation by grace through faith. This is what lay hidden in the Latin Scriptures and the church system of penance and merit. This is why the Bible had to be translated, and ultimately this is why Tyndale was martyred. He wrote,

Faith the mother of all good works justifieth us, before we can bring forth any good work: as the husband marryeth his wife before he can have any lawful children by her. (William Tyndale, 156–57)

Man is lost, spiritually dead, condemned. God is sovereign, Christ is sufficient, faith is all. Bible translation and Bible truth were inseparable for Tyndale, and in the end it was the truth — especially the truth of justification by faith alone — that ignited Britain with Reformed fire and then brought the death sentence to this Bible translator.

In October 1536, at only 42 years of age, Tyndale’s one-note voice was silenced as he was tied to the stake, strangled by the executioner, and then consumed in the fire. But because of his vernacular English translation, the song itself swelled into a mighty British chorus of chambermaids, cobblers, and, yes, even plowboys.

For more on William Tyndale:

Filling up the Afflictions of Christ: The Cost of Bringing the Gospel to the Nations in the Lives of William Tyndale, Adoniram Judson, and John Paton by John Piper