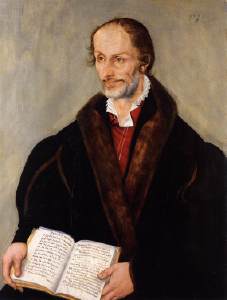 He was not the kind who started revolutions, but the kind who brought order to the ensuing chaos. His mentor, Martin Luther, was brash, impulsive, and forceful. But Philip Melanchthon was a timid, sober-minded unifier. Luther, by his own admission, was “substance without words,” while his brilliant young disciple was “substance and words.”

Luther had little concern for precision or guarding against misconception; Melanchthon made nuance his forte. Luther said he used a spear, while Melanchthon used pins and needles. Luther was a pioneer, hacking his way through centuries of superstitious brush with an apostolic machete. But Melanchthon, like Bullinger in Zurich and Calvin in Geneva, played the part of the calm, collected systematic, grading the Protestant path for generations to come.

He was “the quiet reformer” — and a fitting complement to the loud, boisterous Luther. But not only was Melanchthon known as quiet and peaceful, but on occasion he demonstrated an explosive temper. And not only was he relentlessly curious, and a master of many subjects, but he also was strangely superstitious. Like every sinner, he was his own inconsistent blend of virtue and vice, and God was willing to work with that.

Born in 1497 in southwest Germany, Melanchthon was nephew to renowned humanist Johann Reuchlin (1455–1522), who suggested, in the humanist tradition, that young Philip change his last name from Schwartzerdt (“black earth”) to the Hellenized Melanchthon.

A child prodigy, Melanchthon studied the classics in Heidelberg and Tubingen, and arrived in Wittenberg in 1519, at age 22, just as the Reformation was heating up. That same year, he accompanied Luther as an aid to the Leipzig Disputation. By 1521, he published the first edition of his Loci Communes(“basic concepts”) which started as a commentary on Romans and sought to tie Christian theology, inspired by Luther, to the biblical text, rather than the philosophical categories of medieval scholarship.

As the fires of reform raged, Melanchthon was there at Luther’s side in 1529 at Marburg, and there in Luther’s stead in 1530 at Augsburg, where he represented the Lutheran cause — and even drafted the Augsburg Confession — since Luther was an outlaw and unable to attend.

Melanchthon’s close association with Luther, however, did not mean that all Lutherans embraced him. Even while Luther was still living, some impugned Melanchthon as a corruptor, that he was hijacking Luther’s bold movement for something more docile. Meanwhile, many others greatly appreciated Melanchthon’s nuance, level head, and theological acumen and thought he was doing his pioneering friend an invaluable service.

Melanchthon was too careful a thinker to agree with Luther on everything. But even as differences emerged, he always thought of himself as Luther’s disciple. He was helping his mentor, not rebelling against him, in maturing his theological insights.

His two key divergences with Luther, for which some detractors would relentlessly take him to task, pertained to the bondage of the will and the Lord’s Supper. As early as 1540, a decade after Augsburg, and six years before Luther’s death, Melanchthon went public, in an updated version of the confession, with an iterated view of the Table. His opponents accused him of being a crypto-Calvinist on the Eucharist; however, in the other key divergence, he clearly moved away from Geneva. Melanchthon rejected double predestination, which he thought a necessary entailment of Luther’s view of the will, and suspected that at least some of Luther’s followers were going too far in their sense of the will’s bondage.

Leader of the Lutherans

As the years passed, even after Melanchthon’s death in Wittenberg in 1560, “the quiet reformer” carried the day in one of his major disagreements and lost the other. With the 1577 Formula of Concord, and the 1580 Book of Concord, “Lutheran orthodoxy emerged as playing down the doctrine of predestination (with Melanchthon) and affirming the real presence in the Eucharist (against Melanchthon)” (The Reformation, 353). From a Reformed perspective, both decisions went in the wrong direction, and account for key differences with Lutherans today. We’d say Concord would have been better off to hear Melanchthon on the Table and listen to Luther on the will.

In the final tally, Melanchthon became the intellectual leader of the Lutherans. Not only was he the first systematic theologian of the Reformation, and one of its most significant figures, but he designed educational systems that gave Lutheranism staying power not just in his unstable days but in the even more turbulent times to come. God put Melanchthon’s gifts, quirks, and even inconsistencies to good use to reinforce Reformation theology as a world-changing force.

For more on Philip Melanchthon:

Reformers in the Wings by David C. Steinmetz