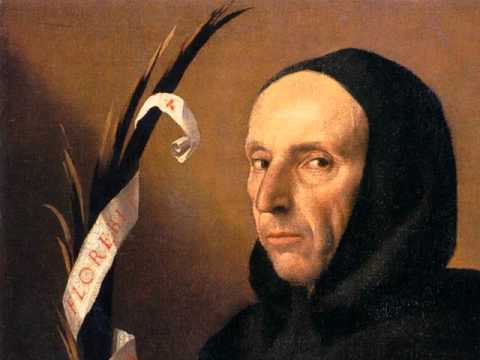 Surrounding the base of the Luther monument in Worms, Germany, sit the four forerunners of the Protestant Reformation — Jan Hus, John Wycliffe, Peter Waldo, and Girolamo Savonarola. They could not have more different personalities, yet each inspired Luther’s reforms in his own way. Luther found Savonarola personally inspiring: as Luther traveled to the Diet of Worms in 1521 to stand trial — after burning the papal bull that excommunicated him — he carried on his person a picture of the Dominican friar.

As Luther faced the possibility of death in Worms, perhaps he compared his own life to Savonarola’s: with a prophetic voice, Savonarola had condemned the Roman church’s corruption. His conflict with the pope climaxed in his excommunication and execution by fire. Luther was likewise excommunicated for his complaints against papal abuses. And though Luther escaped his own death sentence, he found a particular resonance with Savonarola; two years after hiding away in Wartburg Castle, Luther published Savonarola’s prison meditations on Psalms 51 and 31 and praised him as “that godly man of Florence.”

Born to a wealthy family in Ferrara, Italy, in 1452, Savonarola was a precocious young man with a penchant for learning. Intended by his parents for the medical field, he made a sudden choice at 23 years old to join the Dominican order after becoming disillusioned with the vanity of Italian culture. As a young friar, he soaked deeply in the writings of Thomas Aquinas and in Scripture, quickly demonstrating a capacious mind, which allowed him to commit most of Scripture to memory.

Savonarola arrived in Florence in 1490 already renowned for his learning, yet it was his preaching that catapulted him into the center of Florentine reform and politics. Often from the cathedral in Florence, Savonarola would preach to thousands in the vernacular with powerful imagery and simple language from the Scriptures. He announced the saving grace of Christ with biblical potency while simultaneously offering excoriating critiques of the immoral practices of political and ecclesial leaders.

His influential preaching, along with some remarkable events outside Savonarola’s control — the French king’s surprise invasion into Italy along with a devastating disease — suddenly elevated his influence in Florence. Equally important in his ascent as the city’s prophetic voice was the pervasive belief among ordinary people of an imminent, momentous upheaval related to the end times, especially as the year 1500 approached.

From 1494 to 1498, Savonarola fomented dramatic political and social change. His preaching became far more prophetic. Emphasizing Christ’s return, he called Florence to live as a new Jerusalem. His moral reform bled into political reorganization as he worked to establish a “Christian republic,” much like Calvin later did in Geneva.

Towards the height of these changes, he organized the youth of Florence to model and incite for reform, precipitating several “Bonfires of Vanities” in protest against the annual Mardi Gras Carnival. These youths led citizens in destroying instruments of temptation like carnival masks, playing cards, fine dresses, makeup, mirrors, and even musical instruments. The last of these occurred in the Piazza della Signoria at the center of Florence on February 7, 1497, just months before Pope Alexander VI excommunicated Savonarola.

After his excommunication, Savonarola’s conflict with Pope Alexander VI exploded when the pope captured letters Savonarola had sent to the kings of France, England, Spain, Hungary, and the Emperor of Germany, pleading with them to call an ecclesiastical counsel to depose the pope for his abuses. Savonarola opposed not the office, but the person of Alexander VI and, in this way, differed from later Reformers’ more expansive critiques of papal authority and Catholic doctrine.

Insofar as Savonarola affirmed the primacy of Peter, encouraged devotion to Mary, and tended towards a semi-Pelagian view of salvation, he remained doctrinally within the Roman Catholic Church. But insofar as Savonarola called for moral reform, condemned papal abuses, and elevated the authority of Scripture, he anticipated the Reformation.

Although Savonarola’s one-man reform movement in Florence did not continue long in Italy after his death, his passionate preaching and zealous reforms had exposed the church’s corruption like a brief yet bright match lit in a dark cave. Savonarola’s spark was the kind by which Luther, just two decades later, would kindle his own fire for reformation.

For more on Girolamo Savonarola:

Prison Meditations on Psalms 51 and 31 by Girolamo Savonarola