Do Leaders Really Need To Pray? The Role of Prayer in Leadership 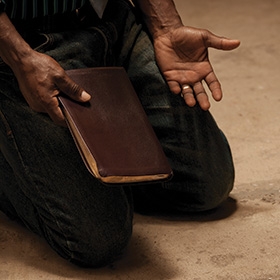 How important is a leader’s prayer life? Consider the following two examples (both composite characters). Sue is a highly successful CEO who quickly advanced through the ranks of her company because of her talents, abilities and willingness to outwork most of her co-workers. She has led her institution to remarkable growth and impressive financial success. When Sue experiences a crisis in the company, she responds with creative problem solving, fierce determination and hard work. While prayer is not part of her leadership, she has amassed impressive personal possessions, wide-ranging influence and significant power. Meanwhile Tom is equally accomplished. His company is doing well financially and has a growth curve similar to Sue’s organization. Tom is very concerned about serving the Lord through his work and consistently gives God credit for his success and the growth of his company. He tithes the profits faithfully. Recently, when tensions among employees were on the rise and product orders were dropping off, he called a friend to come and pray through the plant. Given these two examples, it’s fairly obvious that prayer is not a necessity for success as a leader. There are institutions led by “non-praying” CEOs that have experienced significant financial surpluses and whose bosses are highly regarded by their employees. There are lots of leaders who never give a passing thought to getting on their knees.

So why pray? Perhaps because as a leader you have come to the place where you’re in so far over your head you don’t have anywhere else to turn. Perhaps you just need a word of encouragement or an extra measure of courage in a challenging crisis. I believe that leaders need prayer to stay humble, to find direction/wisdom, to act with consistent courage and to find reassurance/affirmation when they find themselves all alone.

Do nothing out of selfish ambition or vain conceit. Rather, in humility value others above yourselves, not looking to your own interests but each of you to the interests of others. (Phil. 2:3-4)

Malcolm Gladwell (Outliers: The Story of Success) points out that virtually every person who has achieved success has done so, not only because of their talent, intelligence and hard work, but also because of an incredible set of circumstances that has given them advantages others have not enjoyed. Most studies on the traits of effective leadership include the attribute of humility—from Kouzes and Posner to Jim Collins; from Lencione to Covey to Drucker. All of them recognize what Einstein taught: we are but a speck in an unfathomably large universe. Every leader who seeks a legacy of effectiveness realizes that he or she stands on the shoulders of someone else. They know that their abilities, opportunities and even their very breath come from the hand of God. William Loritts (Leadership as an Identity: The Four Traits of Those Who Wield Lasting Influence) writes, “For a Christian leader, brokenness is a dear friend, and pride is the enemy.” Leaders who would be grateful, humble and broken must begin on their knees, thanking God for his grace and mercy in their lives.

Commit your works to the Lord and your plans will be established. (Prov. 16:3)

Sooner or later it happens to every leader. They find themselves in a crisis where nothing they know or have been through is adequate to inform their next decision. They have some inkling of Moses’ feelings as he saw the Red Sea in front of him and the Egyptians behind him. Or of what must have been going through Paul’s mind as he tried to collect his thoughts while sitting blind on the side of a dusty road leading to Damascus.

Zig Ziglar’s Basic Rules for Making Good Decisions includes this guideline, “I like to pray about my decisions. I ask God to help me see the truth of my motives and to lead me in the way I should go.” Prayer for direction, whether concerning trouble or trivia is indispensable for the leader who would be dedicated to following God’s plan.

While I love the spiritual, Joshua Fit the Battle of Jericho, it doesn’t present the most accurate portrayal of the biblical record. While Joshua took charge outside the walls of Jericho, it must be noted that he didn’t “fight the battle.” In the chapter prior to the battle account in Joshua 6, he meets the commander of the Lord’s army (Josh. 5:14). “At this, Joshua fell with his face to the ground in reverence. ‘I am at your command,’ Joshua said. ‘What do you want your servant to do?’” It is much easier to act with courage—to make the hard decisions, when you know that God has equipped you and empowered your leadership. You only know that by falling on your face before him.

Prayer for Reassurance and Affirmation

All great leaders get hurt. When they make decisions that are unpopular or are misunderstood, it is not unusual for the people they thought loved and cared about them to attack or leave. In the midst of the pain and frustration that results from being abandoned, the consistent, fervent prayer life of a leader is critical. It is the only way that a leader can hear the Voice above all others that says, “I will never leave you nor forsake you.” The reassurance of the Lord, heard when a leader takes time to listen, is the only thing that enables a person to pay the price of leadership day in and day out.

While most leaders are chosen because of their knowledge, experience and ability, I would suggest that their most important resource is a consistent prayer life. Prayer, the place where human beings and God meet, is the one thing that keeps us humble and gives us direction, courage and reassurance in all of life—including the times when we’re called to lead.